Through the Eyes of a Trout

If you think back to high school biology class you can probably recall the basic structure and function of the human eye: Light passes through the clear front covering of the eye (the cornea), and enters the eye through the dark central portion (the pupil). The diameter of the pupil, and consequently the amount of light entering the eye, is controlled by expanding or contracting the colored part of the eye (the iris). Behind the pupil is a clear lens that serves to focus the light onto the retina at the back of the eyeball. The retina contains a network of sensory cells that can perceive either low light information in black & white (rods), or color and fine detail (cones). To focus the image on the retina, the lens shape can be changed by contracting small muscles attached to the lens.

﻿
A trout’s eye is similar in structure to ours, but given that fish have evolved over millions of years to survive in a medium vastly different than air, there are bound to be some differences in the way a trout’s eye is structured, and in the way it functions.

Unlike the human eye, a trout’s eye does not have an adjustable iris; the pupil is fixed in in the open position. Combine this with the fact that fish do not have eyelids, and it becomes apparent that trout must have other mechanisms to regulate the amount of light reaching the sensory cells of the retina. Of greatest concern are the rods which are very sensitive and easily damaged by bright light. The cones on the other hand require bright light in order to see color and fine detail. In response to this, two mechanisms have evolved that allow trout to see effectively under changing lighting conditions: In bright light there is an increase in melanin pigments in the upper layer of the retina that shield the rods from bright light during the day (much like wearing dark sunglasses). In addition, the rods physically migrate deeper into the retinal layers where they are exposed to less light. During periods of low light, and at night, the process is reversed; the amount of melanin pigment decreases allowing more light to reach the sensory cells, while the rods migrate closer to the surface of the retina. 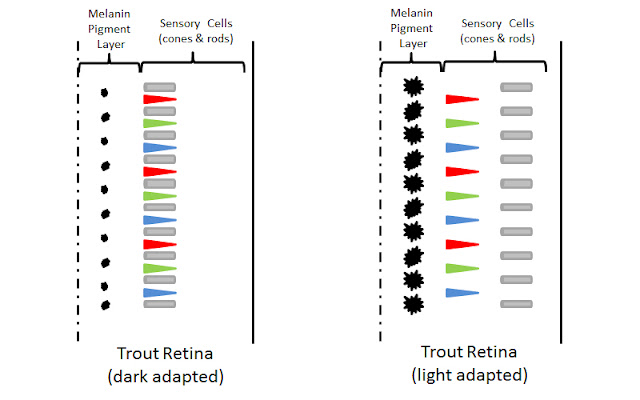 ﻿
These mechanisms are so effective at regulating light that it allows many fish (including trout) to have a higher concentration of rods in their retina – the result is that trout have superior low light and night vision compared to us. The down side is that these mechanisms are much slower than the rapid response we get from adjusting the diameter of our pupils (studies show that the response of melanin, and rod migration, takes from 10 to as much as 70 minutes to adjust to rapid shifts in light intensity). This is not usually a problem since changes in light intensity at dusk and dawn are gradual enough that trout do not experience any visual deficits. But on dull cloudy days when the sun suddenly breaks through the clouds, feeding trout will sometimes move deeper in the water column or seek out shady areas until their eyes adjust, or the sun is once again obscured. Bright sunlight also will also encourage fish to seek cover due to the increased risk of predation.

Trout spend a considerable amount of time watching for predators, but they also spend as much, if not more time looking for something to eat. Much of what a trout eats is on the small side and consequently they need to be able to see and focus on tiny food items at very close range. A trout’s lens and focusing system allows them to do just that. Unlike our relatively flat and flexible lens, a trout’s lens is almost spherical, and rigid. The spherical shape is made necessary by the medium in which trout live – as light passes from air into a more dense medium like the human eye, the light bends slightly (as a result of refraction) thus reducing the amount of bending the lens needs to do to focus the image. Since trout live in an already dense medium, there is virtually no refraction as light enters their eyeball; trout therefore need a more powerful (i.e. spherical) lens to focus the image. With the lens being spherical and not easily deformed, the muscle attached to the lens focuses the image by moving the lens back and forth rather than by deforming the lens. The end result of all of this is that trout are able to obtain precise focus on a bug a mere inch or two from their nose (to fully appreciate this, hold you finger one inch in front of your nose and try focusing on your fingertip).

We have already touched on the two basic types of sensory cells in the trout’s retina. The rods are designed to see under poor lighting conditions but can only perceive in black and white (really shades of gray). We know that the rods are used primarily for vision at dusk, dawn and at night, and since the rods can only perceive in shades of gray, fly color should become slightly less important when fishing a hatch at these times. I say slightly less important because it is still necessary to match whatever shade of gray that the fish perceives; and the easiest way to do this is to match the color of the fly to the actual insect. Despite the lack of color vision in low light, trout have excellent visual acuity in low light and have no problems picking out hatching insects.

So how important is fly color during the day? Like us, trout have several types of color sensitive cones in their retina, each type responding to a different wavelength (i.e. color) of visible light. The colors perceived by the different cone types are combined to produce a full color image in the same way that red, green and blue combine on your LCD computer monitor. Numerous experiments have shown that trout can not only differentiate between different colors, they can distinguish between different shades of the same color. While there is no way of knowing exactly how colors appear to a trout, they do have excellent color vision.

In addition, juvenile trout have specialized cones that give them the ability to see ultraviolet light (UV), a frequency just beyond what we consider to be the visible spectrum. This ability to see UV light is thought to help juvenile trout see the often transparent zooplankton that forms the bulk of their diet. But studies have shown that as trout mature and their prey source changes, their ability to see UV light is greatly diminished. Despite this, mature trout have one more trick to up their visual acuity; they have the ability to perceive polarized light. Light becomes partially polarized as it reflects off a surface (this is why we wear polarized sunglasses to see through the glare off the water’s surface), or as light refracts as it passes into water. The ability to perceive polarized light is thought to increases the contrast between similar earth tone shades in the subdued lighting of the underwater world.

What is clear from all of the research into trout vision, and from the experiences of fly anglers worldwide is that trout have excellent vision. To be able to single out an insect riding the surface tension in fast moving water, and be able to zero in on it and delicately pluck it from the surface, is nothing short of amazing. In some ways it is a wonder we are able to catch any fish at all – but as we delve deeper into other aspects of trout vision you will see that other factors like the physics of light in water, and the way a trout’s brain processes visual information work in our favor.
Posted by Rob Hinchliffe at 7:37 PM

Rob Hinchliffe
Hi everyone and welcome to TroutFodder. As a biologist, aquatic entomologist, and fly angler, I am fascinated by trout feeding behavior, aquatic insect behavior, and the intersection of the two that ultimately results in that moment when the fish takes your fly. Over the years I have learned a lot about both trout behavior and bug biology – and it has certainly improved my ability to catch fish. I’d like to share some of that knowledge with you. If you enjoy my blog then add yourself as a follower and share the link with a friend. And be sure to check out my YouTube channel as well.